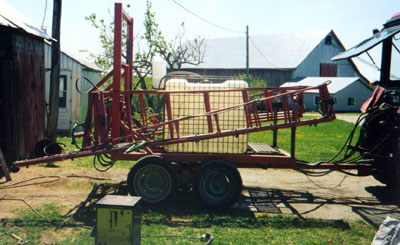 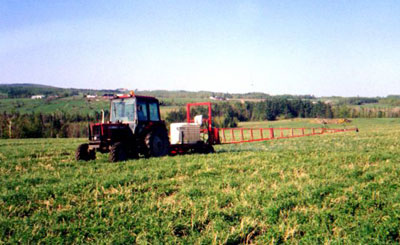 This was one of the first projects undertaken where an old sprayer used by BLB Farms for contract spraying in the Eastern Townships of QC needed a complete overhaul. A new 50' boom was designed, built and installed. One hydraulic piston controlled the overall height of the boom from 18" to 54" to allow spraying of short spring weeds or taller immature corn. Two other pistons independently raise or lower the arms to contend with varing terrain contours.

There where some initial problems with the hinges the first season that caused excessive cracking to the boom at the piviot points. This was solved the next year with much simpler hinges and the unit has been spraying 2000 plus acres per year ever since with minimal yearly maintenance.