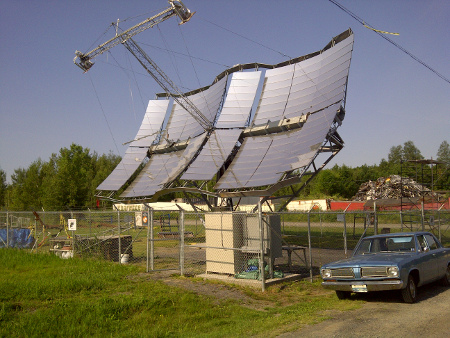 This prototype solar concentrator was the result of a collaborative effort in which Practifab was heavily involved with for over 4 years.

The need to solve our planet's energy issues was a driving force for the development of this system.

By combining the genius ideas of an inventor, the technical precision of 3-Dimensional drafting/simulation experts, the attentive research of Universities, the know-how of industrial suppliers together with Practifab's eclectic knowledge and collaboration skills this solar concentrator came to be.

Involvement in this project began with participation in development of the intellectual property. You may view the Patents Pending here. Then the initial conceptual design process, followed by refinement and evolution of prototype design including scalable manufacturing methods. Practifab's primary involvement directing the technical drawings and specifications, incorporating feedback from collaborative support and suppliers. And finally Practifab was instrumental with assembling RFQ's, supplier negotiation, purchasing and coordination of suppliers.

This very exciting project continues at the research level and many concepts in the project holds such fantastic potential in driving the costs for renewable energy down.

There has been a treasure trove of valuable knowledge and skills acquired during this project and Practifab would consider involvement with projects in the field of energy harnessing, conversion and storage.